It’s with great relief to announce that our Metropolis region reporter Viktor Levick, who disappeared during the Sansha incursion lead by Slave Gelhan01 in Hebisa, has been found alive after thirty days missing.

Viktor was dispatched to investigate the new wormhole and was able to send back a large amount of analysis data before dropping out of contact minutes after the Sansha forces deployed through the wormhole and engaged the capsuleer forces in Hebisa.

His severely damaged Minmatar designed shuttle was discovered over 500km from the incursion location, well out of standard ship sensor range. 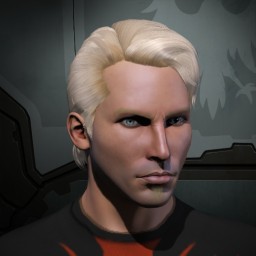 Light Speed Interactive were able to grab a few minutes with his would be rescuer, Darix Lentiri:

“Me and a couple of buddies had been salvaging some of the wreckage left from the incursion over the past few weeks. The whole site was pretty much picked clean so I ran a few scans to see if anything had drifted out of range and found his wreck. Luckily I’d brought a scan probe launcher me and was able to find him pretty quickly.”

We asked if he had any ideas how he could have been so far away from the initial incursion site:

“The shuttle was a real mess. Something had hit it hard, smashing one side completely. One of its thrusters was still intermittently firing though, pushing it on. I’m guessing it just drifted out over the last few weeks. Makes you think doesn’t it? Being a capsuleer, my pod would have kept me safe. I’ve no idea how he coped out here on his own.

Viktor remains under close observation at the medical facility in nearby Polstodur where he is being treated for minor injuries, severe dehydration and starvation. We hope to get a face to face interview with him soon to learn about happened out in Hebisa and how he could have survived so long.